Check out my incredible Cinderella story that played LIVE on TV :D

Wow, what a day, and what a party!! I don't even know where to start telling the story now that I'm back at the farm, exhausted from my own show! He he 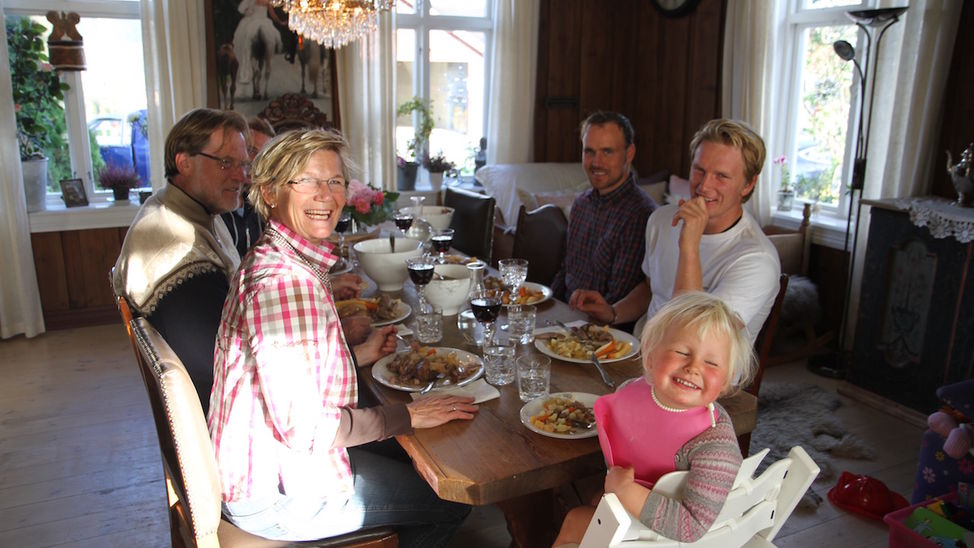 Okay, so let's start at the beginning ;) Since the fall is such a busy time, I tried to make other plans while I was in Olso anyways. So the day before the royal party, I had a meeting with a publishing house that asked me if I could write a book about myself!! And then I was the program leader for a Podcast.
After that, I went to a girlfriend's house to hang out and have dinner but I ended up talking to journalists on the phone half the night! But we did have a really good time, too. 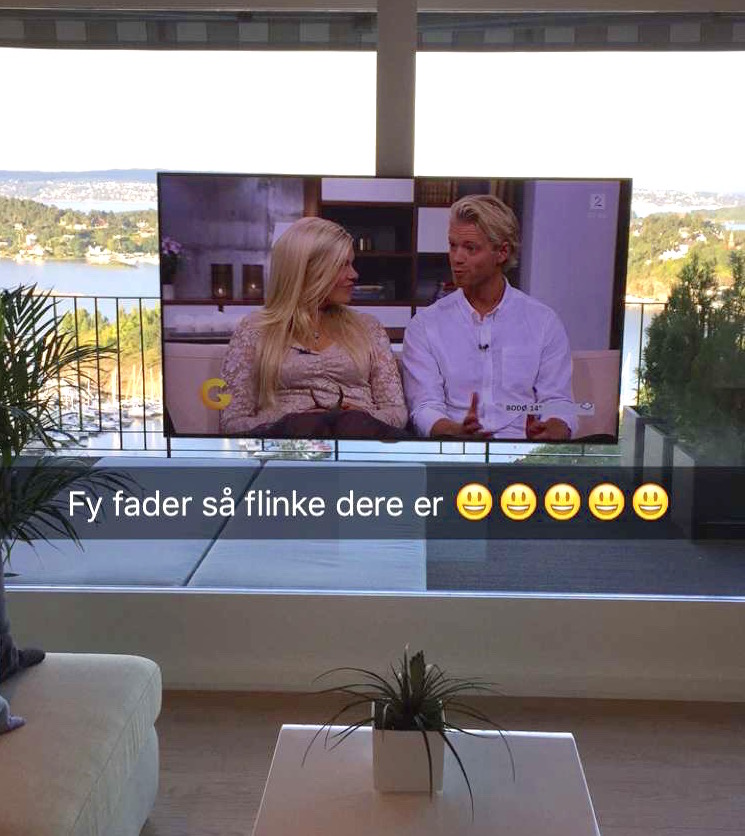 In the morning I got in a taxi sent from the TV network that broadcasts Good Morning Norway (the show I was going to be on). My cousin, Eilev, was there, too, and this Snap was taken from one of my girlfriends, saying they thought we did good! :) 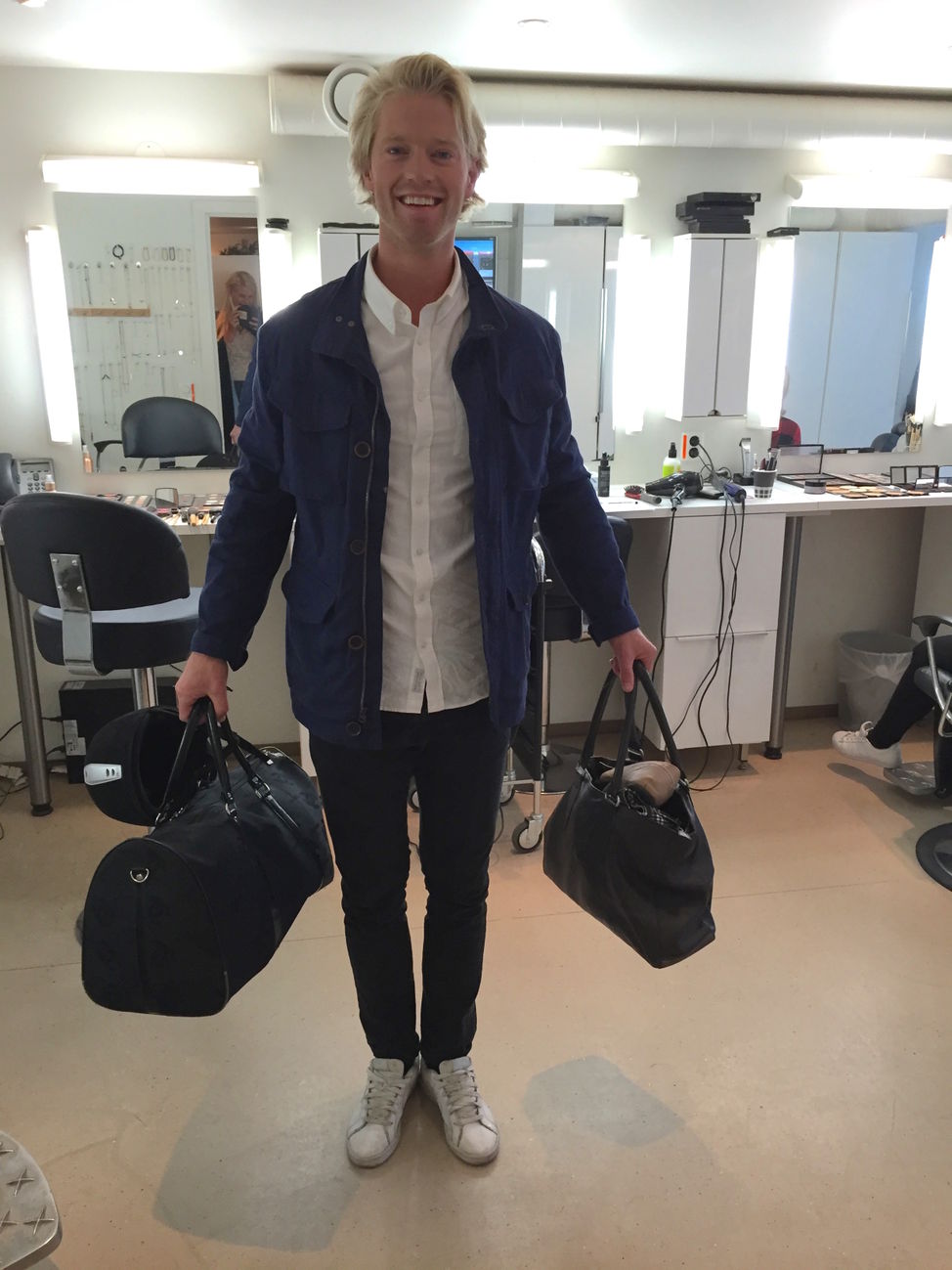 It was a crazy schedule that day, and cousin Eilev said he'd help me and be my "bag carrier!" He he Eilev is currently working up a sweat in "Dancing with the Stars" on TV. He is sooo good, too. I really think he could win it! 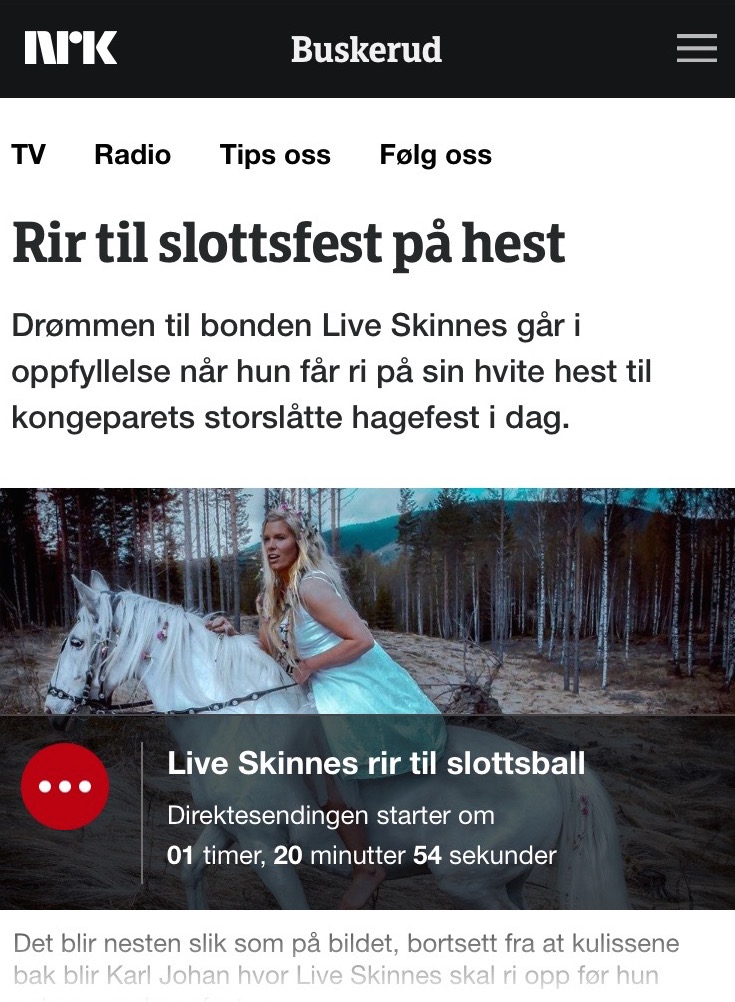 The main TV network of Norway had decided to broadcast my whole ride LIVE!! ;) 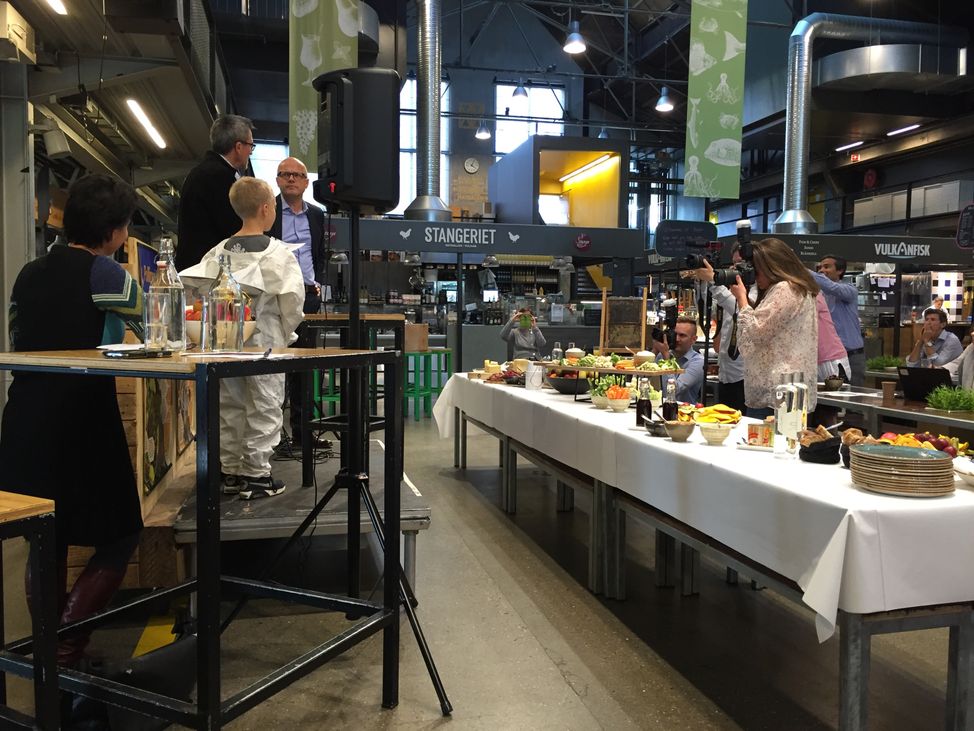 But before the ride could begin, I was booked to attend a press conference with the Minister of Climate to help highlight the plight of the bees dying all over the world. Did you read the post I wrote about that before? 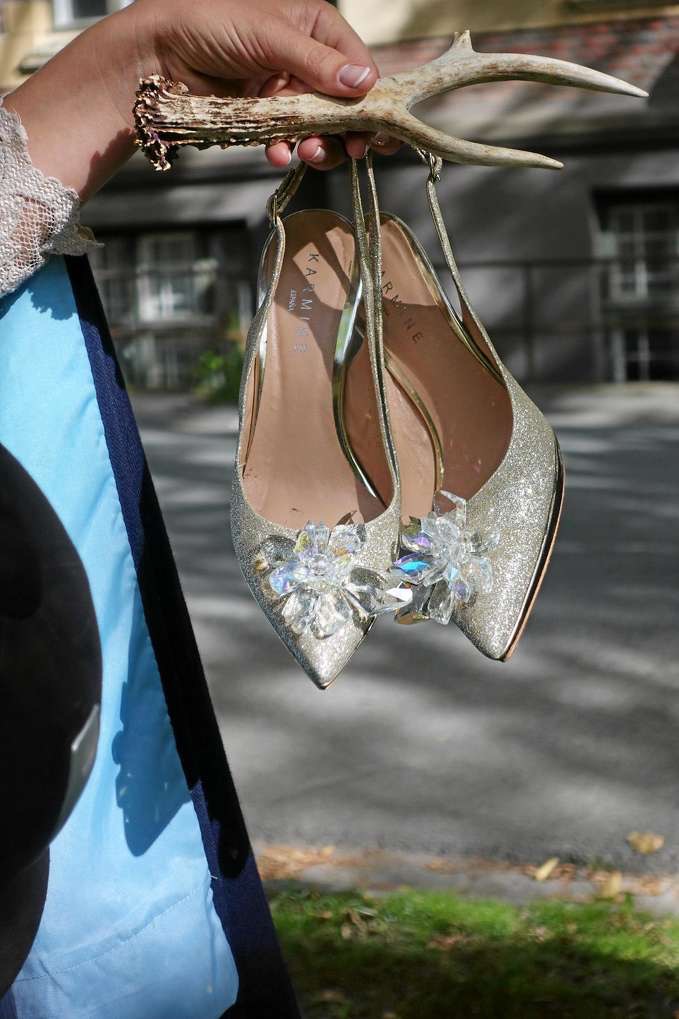 So after the serious stuff, I took my Cinderlla shoes and headed to the stables where the tv crew was waiting. We did some pre-interviews and then my good friend, Linn, came with the horse, and we even had an old "lady side saddle" from 1904 for me to use. I had never ridden one before, but I had pretend to be a professional ;) 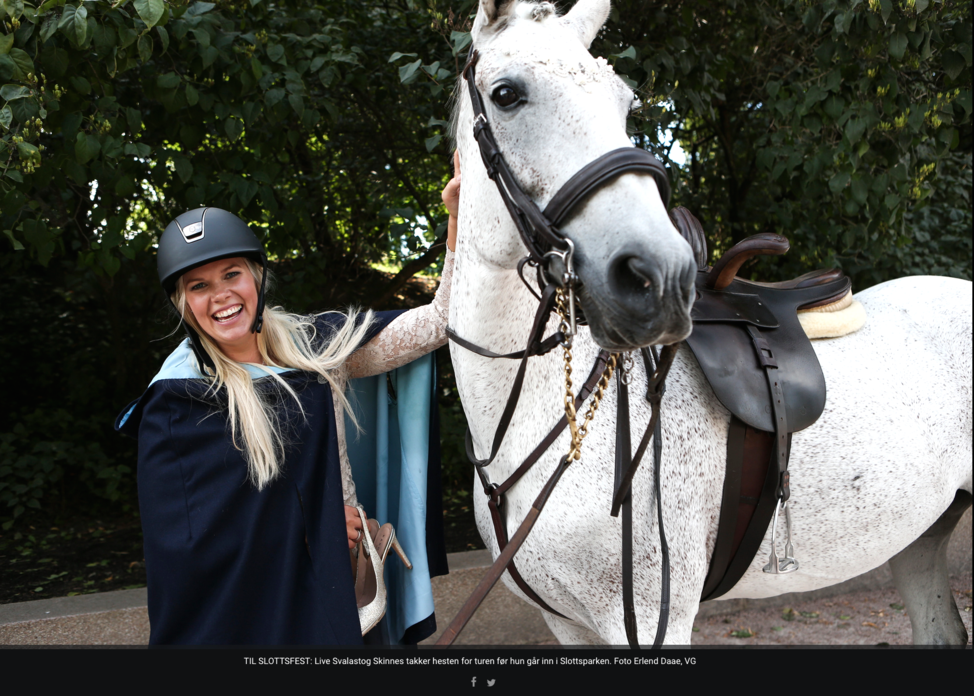 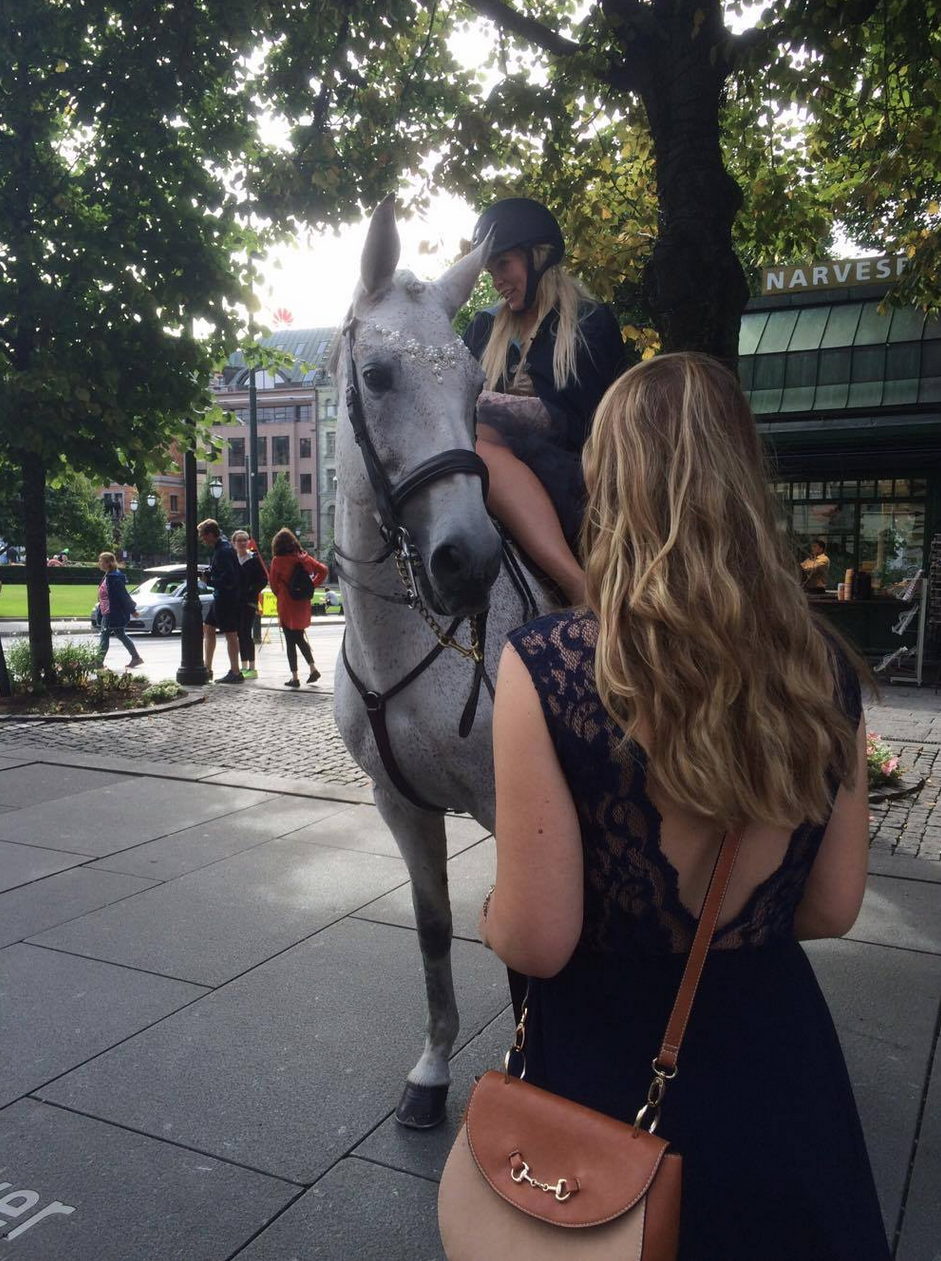 We strolled through the streets of Oslo, and people turned their heads to look, smile and wave. Once I realized the horse was suuuper nice in traffic, and the saddle worked, as well as Linn taking care of me, I managed to take my shoulders down, and really enjoy the ride! :)

Almost at the castle! If you want to watch the ride, there are lots of clips and articles out, so I could give you some links? 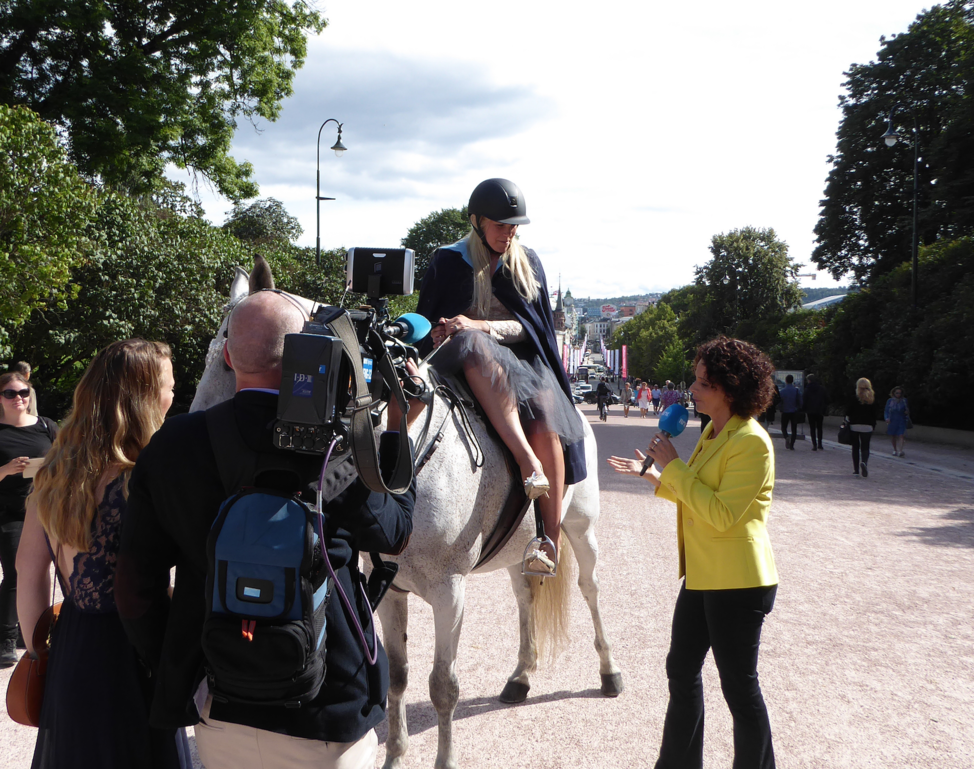 When we arrived, the tv show that covered the garden party was there to great us.

All the stories are in Norwegian, but here is one from Norway's biggest newspaper VG . 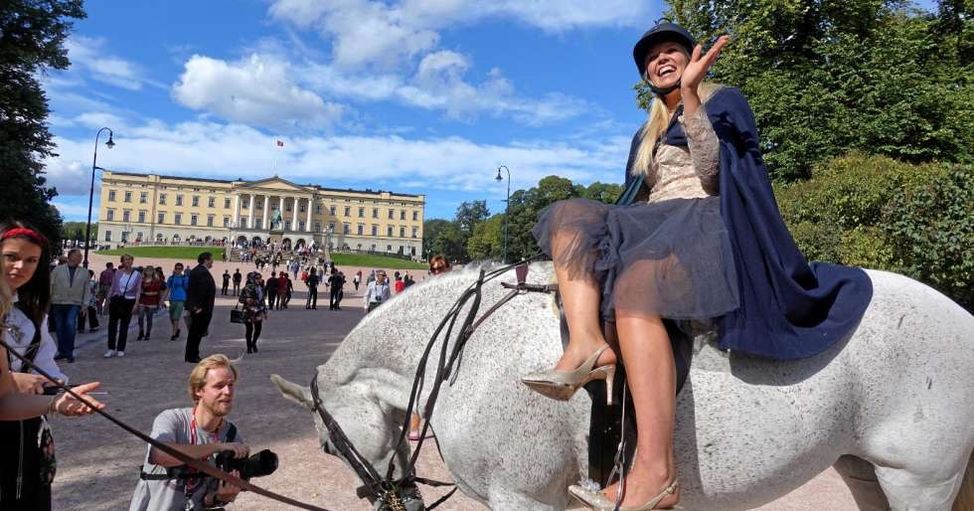 I'm pretty happy as you can see! 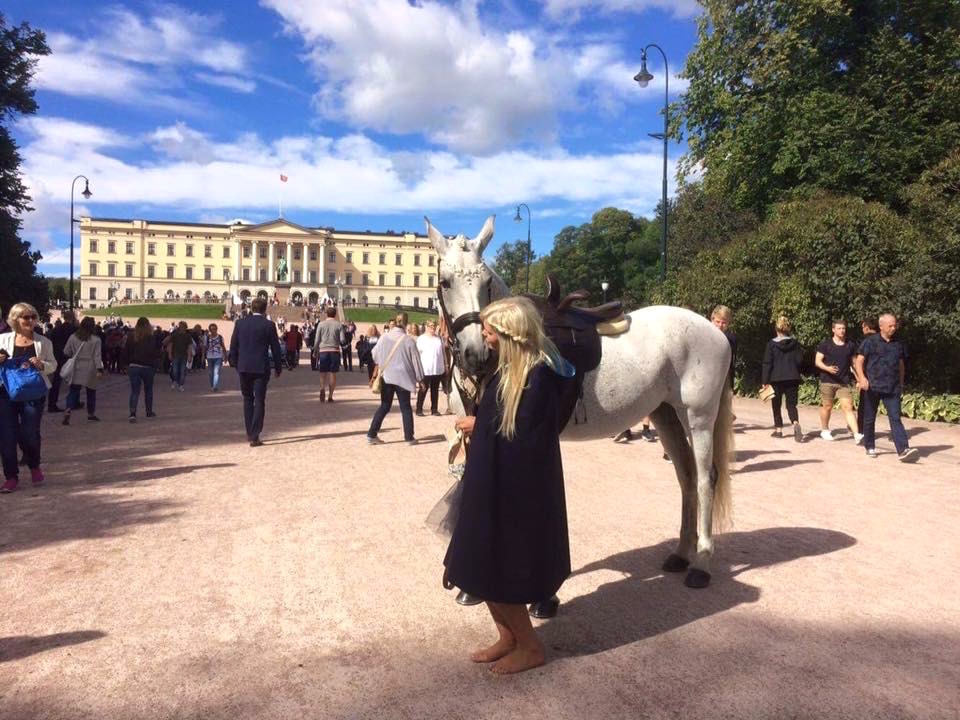 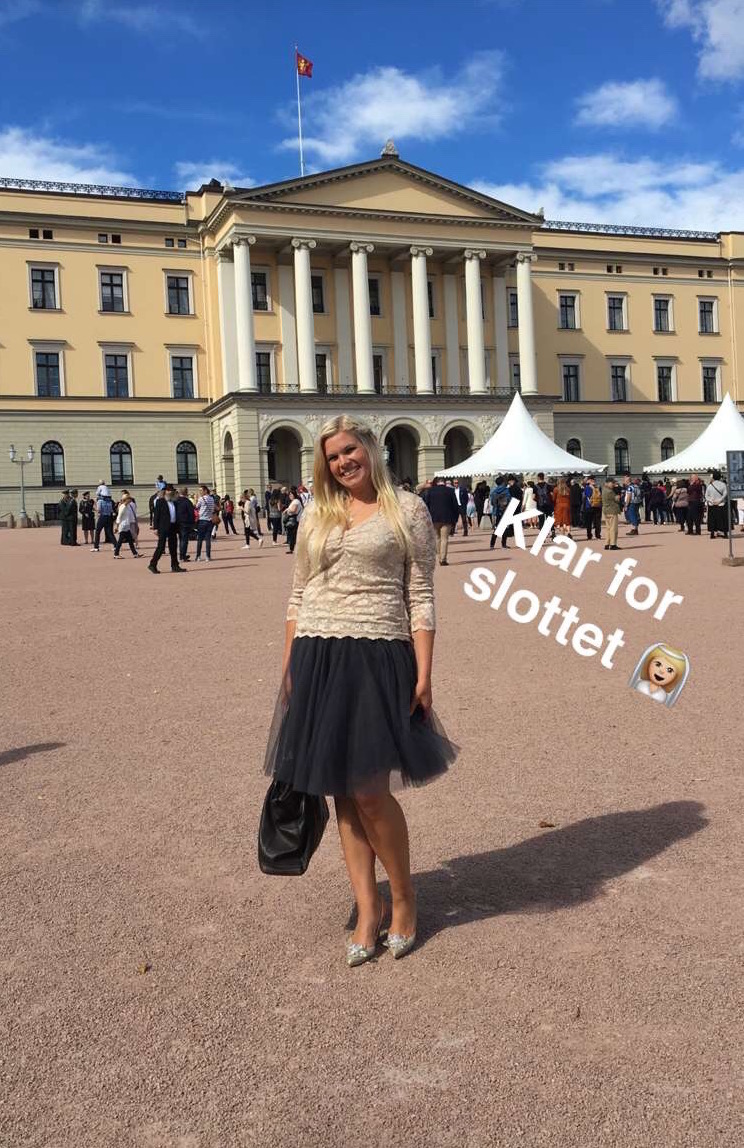 Time to head in to the party! Took off my cape so I looked like a "normal" guest :) 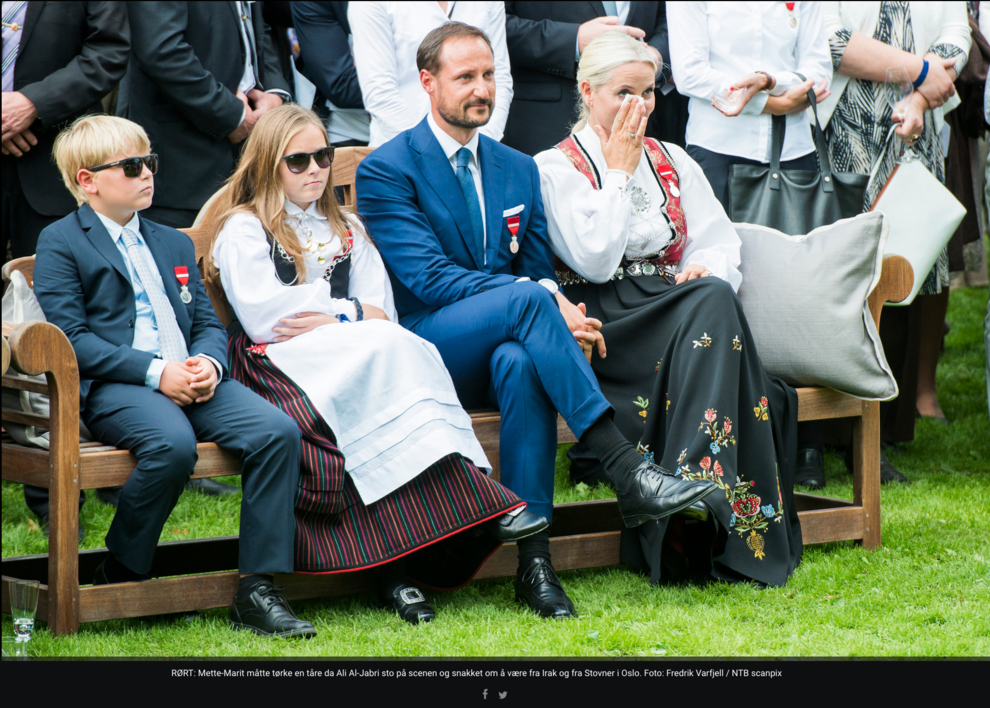 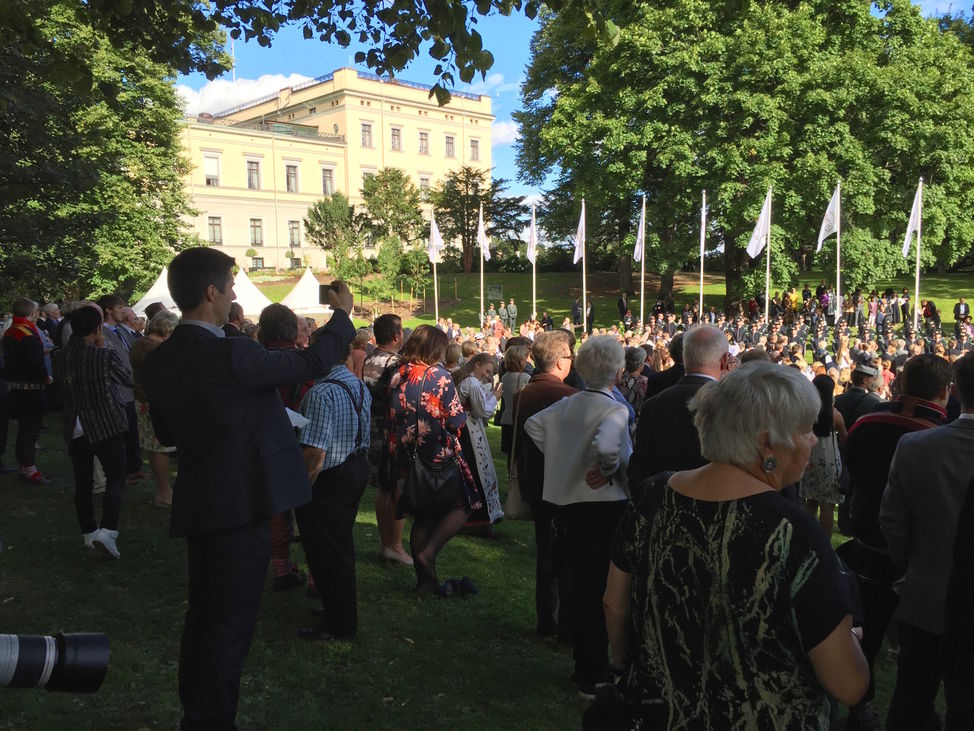 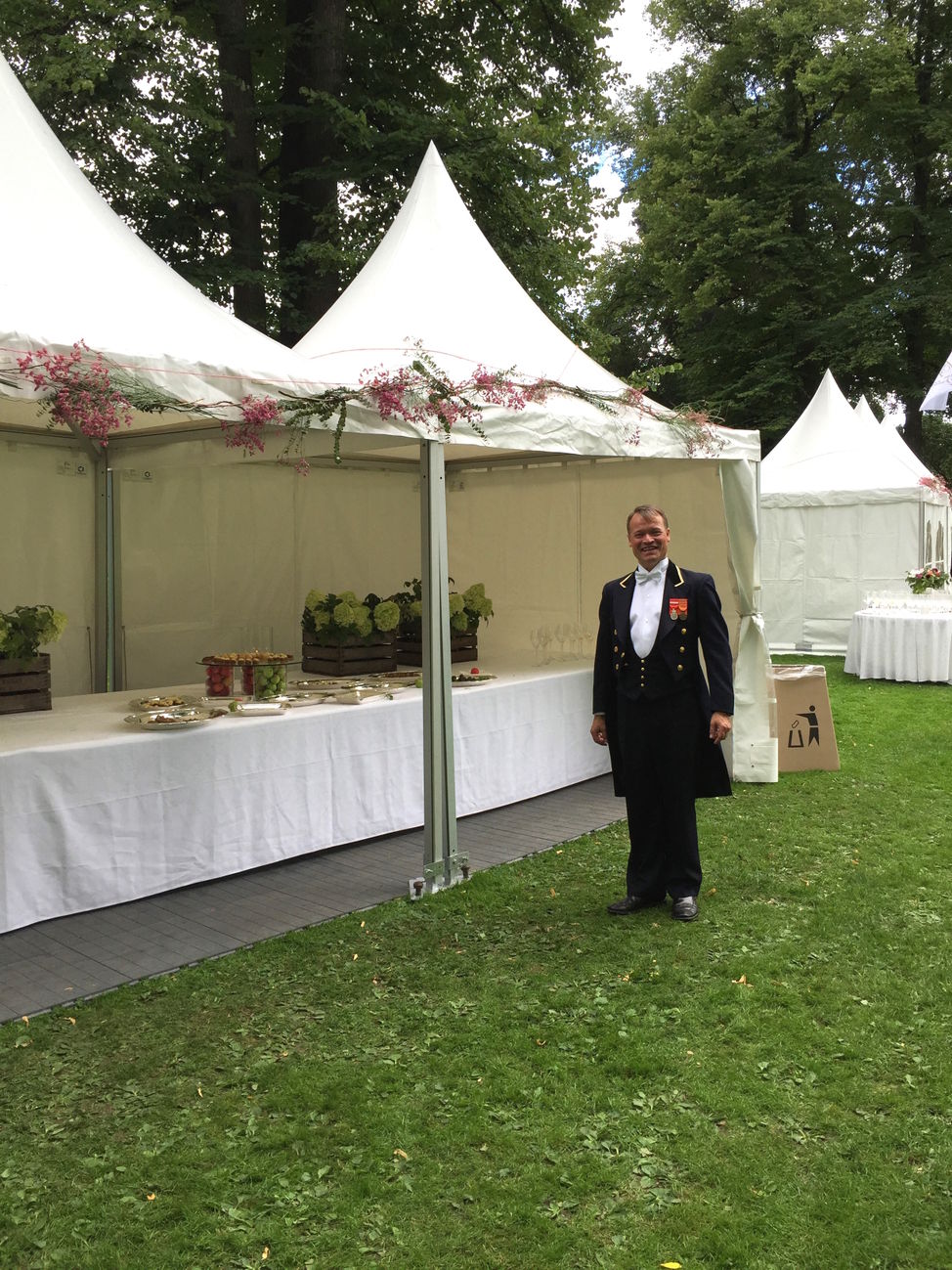 We got food and drinks served on silver platters and everything was done with such attention to detail!
It truly felt royal :) 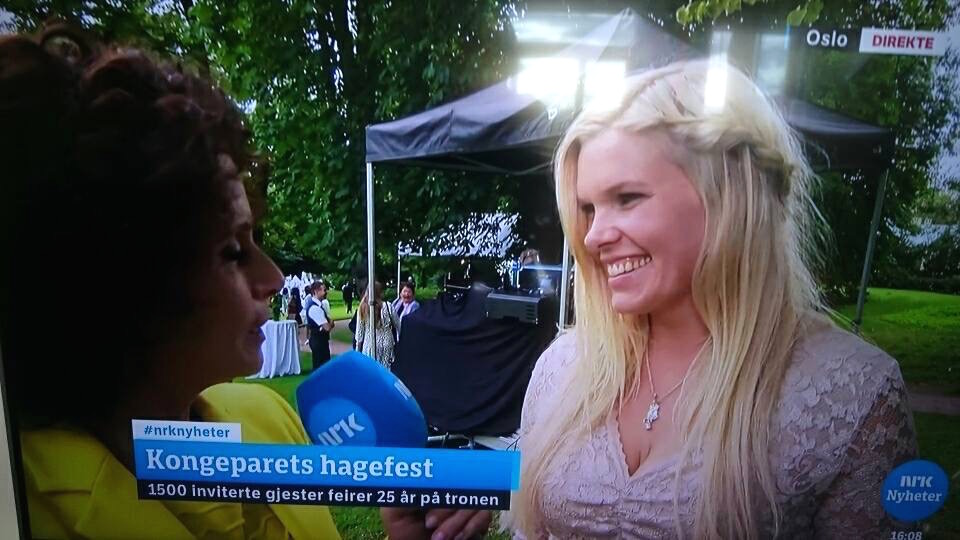 The King's speech was legendary, we had great entertainment and it was so fun to attend. I'm just super happy I was invited, and that I had the guts to go through with my crazy riding plan! :) Cinderella story complete!